The tone of 2017 financial markets proved decidedly upbeat.  Performance of broad equity averages remained strong, as the S&P 500 Index marked its ninth year of advance with a total return of 21.82%.  Bond bears endured yet another span of frustration, as 10-year Treasury yields ended the year at 2.41%, virtually unchanged from 2.44% at the end of 2016. Despite incremental Fed tightening, credit spreads of all ilk continued to narrow and real estate markets remained vibrant.

Amid such solid 2017 performances for U.S. financial assets, it has gone largely unheralded that spot gold posted its strongest annual gain since 2010, rising 13.09% to close the year at $1,303.05.  As shown in Figure 1, spot gold has now posted positive annual performance during 14 of the past 17 years, amassing a compound return of 9.65%, significantly exceeding the 6.32% compound return of the S&P 500 Index (including reinvestment of dividends).

Gold’s 2017 performance added a fresh empirical counterpoint to three common misconceptions about precious metals.  First, gold is often viewed as a catastrophe asset, dependent on financial calamity to establish portfolio utility.  On the contrary, gold’s 22.77% trailing-two-year gain has occurred against the backdrop of a two-year span of respectable GDP growth (Q4 2015 to Q3 2017 average of 1.93%).  Second, gold’s performance is commonly perceived as inversely linked to that of traditional financial assets, most notably equities.  Once again, the fact that gold’s 22.77% two-year gain has accrued coincident with a 36.38% rally for the S&P 500 Index should logically dispel notions of reflexive inverse performance.  Third, we have long warned against the erroneous belief that rising short-term interest rates are inherently threatening to gold’s prospects.  We have suggested rising interest rates are less relevant to gold’s performance than the reasons why rates are rising, coupled with investor assessment of whether the Fed is sufficiently in control of global monetary challenges.

Most recently, after flirting with $1,300 resistance for much of the past year, spot gold drifted down to a $1,241.94 close on the 12/11/17 eve of Chair Yellen’s final FOMC meeting.  Gold bulls had become resigned that a $1,300 handle was not in the cards for year-end 2017.  Then, precisely as the FOMC enacted its December rate hike, spot gold reversed course and recorded higher closing prices on 11 of the final 13 trading sessions of 2017 (ultimately marking the year at $1,303.05).  Obviously, Fed tightening is far less threatening to the gold price than commonly perceived!

The Negative Implications of Rate Hikes on Over-Levered U.S.

We view post-2000 correlations between rising short-term interest rates and a strengthening gold price as more than just coincidence.  To us, the operative linkage between the two resides in plain view for all investors to see—it is simply ignored because its implications are too distressing.  The United States is mired in a structural debt conundrum.  Total U.S. credit market debt ($68 trillion) towers above our nation’s productive capacity ($19.5 trillion GDP).  Our analysis suggests annual (nonfinancial) credit creation on the order of $2 trillion-or-so is now required to keep the U.S. debt pyramid from toppling, and we interpret the past eight years of ZIRP (zero interest-rate policy) and QE (quantitative easing) as the Fed’s tacit validation of our views.  A central tenet of our gold investment thesis is that debt levels, both domestic and abroad, are now so onerous they preclude significant rate increases of any sort (short, long, nominal, real) without setting in motion a painful process of debt rationalization.

While central bankers have conditioned financial markets not to sweat excessive debt levels while they have pinned rates near zero, warning signs are beginning to flash that global capital is increasingly troubled by the potential impact of rising interest rates on the aggregate U.S. fiscal position.  For example, the correlation we have documented above between FOMC rate hikes and rising gold prices may be signaling that investors are less concerned with gold’s rising opportunity costs than they are with the negative implications of rate hikes in an over-levered U.S. financial system.

Initial market euphoria over Trump tax cuts has morphed into sobering analysis of expanding Federal budget deficits.  This past week, Goldman Sachs increased its estimate for 2019 Treasury issuance (to fund growing deficits) to over $1 trillion, during a year in which the Fed currently hopes to reduce its balance sheet at a $600-billion annual rate.  All of this reconnoitering is occurring as the U.S. Total Public Debt ($20.49 trillion) has soared past its “suspended” statutory ceiling ($19.81 trillion), and while Congressional debate over potential resolution is stalled by President Trump’s most recent jaw-dropping characterization of certain African and Caribbean nations.  On 1/10/18, Moody’s weighed in with a lengthy treatise branding Trump tax cuts as “credit negative” for U.S. sovereign paper. On the same day, Chinese officials reviewing the People’s Bank of China (PBOC) foreign-exchange reserves floated the option of “slowing or halting” U.S. Treasury purchases.  Though later branded as “potentially” fake news by another Chinese official, this was not before Chicago Fed President Charles Evans took to the airwaves (1/10/18) to share his newfound preference for suspension of further rate hikes until mid-year.

A prescient barometer of any nation’s financial health is its currency.  During 2017, beneath a drumbeat of headlines which should have been strongly dollar-supportive (including successive highs for U.S. equity indices and “normalization” of Fed policy), the U.S. dollar posted its weakest annual performance in 15 years. The DXY Dollar Index declined a stunning 9.87%, completely at odds with longstanding consensus.   As shown in Figure 3, early 2018 performance of the DXY Index has now opened a technical “trap door” towards 2014 support near the 80 level.   Of all the combinations of market fundamentals which can prove supportive of gold prices, none are more potent than a slumping U.S. dollar amid concern for a deteriorating U.S. fiscal positon.  This is total nirvana for gold. 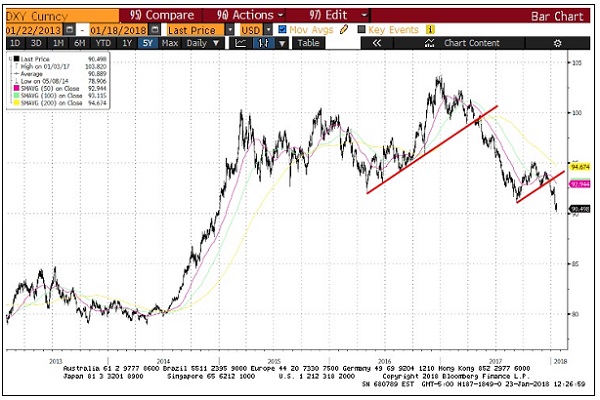 Gold Stands Out Among the Alternatives

In wrapping up 2017 performance, we have memorialized in Figure 4 statistics for spot gold versus the indices of alternative investment vehicles we introduced in our October report (see Why Doesn’t Gold Get the Respect it Deserves?).  We made the case then that a simple bullion commitment can accomplish portfolio diversification roughly on par with that provided by many sophisticated alternative-investment vehicles, without having to pay steep management and incentive fees, or enduring onerous lockup provisions, all while demonstrating lower correlation to traditional asset classes.  As shown in Figure 4, the performance of prominent alternative-asset indices during the past eighteen years strongly supports our contention.   Gold’s 18-year average gain of 9.84% exceeded the 8.98% average increase for the full fleet of our referenced institutional vehicles.  Further, the 10-year correlations between these high-performance Ferraris and the S&P 500 averaged an eye-popping 80.64% or 10 times their average correlation with spot gold (8.05%).

In recent months, we have noticed a distinct uptick in institutional inquiries about precious metals.  We are encouraged that gold appears to be on radar screens at a growing number of endowment and pension allocators, and we will continue to do our best to advance the precious-metal conversation in the institutional community.  Given our comprehensive focus on global monetary affairs, and especially on the implications of U.S. debt levels, we believe a portfolio commitment to gold has never been more prudent than it is today.  These are truly extraordinary times!

1 The MSCI World Real Estate Index is a free float-adjusted market capitalization index that consists of large and mid-cap equity across 23 Developed Markets countries; all securities in the index are classified in the Real Estate Sector according to the Global Industry Classification Standard (GICS®). The S&P Listed Private Equity Index comprises the leading listed private equity companies that meet specific size, liquidity, exposure, and activity requirements; the index is designed to provide tradable exposure to the leading publicly-listed companies that are active in the private equity space. The Thomson Reuters Private Equity Buyout Index is an index made up of independent portfolios intended to track the return of the private equity universe by replicating movements in the Thomson Reuters Private Equity Buyout Research Index. The Eurekahedge HedgeFund Index is Eurekahedge’s flagship equally weighted index of 2723 constituent funds, and is designed to provide a broad measure of the performance all underlying hedge fund managers irrespective of regional mandate. The Credit Suisse Hedge Fund Index is an asset-weighted hedge fund index and includes open and closed funds. The Thomson Reuters Venture Capital Index tracks the return of the venture capital universe by replicating movements in the Thomson Reuters Venture Capital Research. TheMorningstar Diversified Alternatives Index combines both strategic and tactical asset allocation and includes exposure to a diversified set of seven alternative asset classes.The U.S. Dollar Index (DXY) is an index of the value of the United States dollar relative to a basket of foreign currencies, often referred to as a basket of U.S. trade partners’ currencies. The Bloomberg Barclays US Treasury Index measures US dollar-denominated, fixed-rate, nominal debt issued by the US Treasury. The S&P 500® Index is an index of 505 stocks issued by 500 large companies with market capitalizations of at least $6.1 billion; it is seen as a leading indicator of U.S. equities and a reflection of the performance of the large-cap universe. 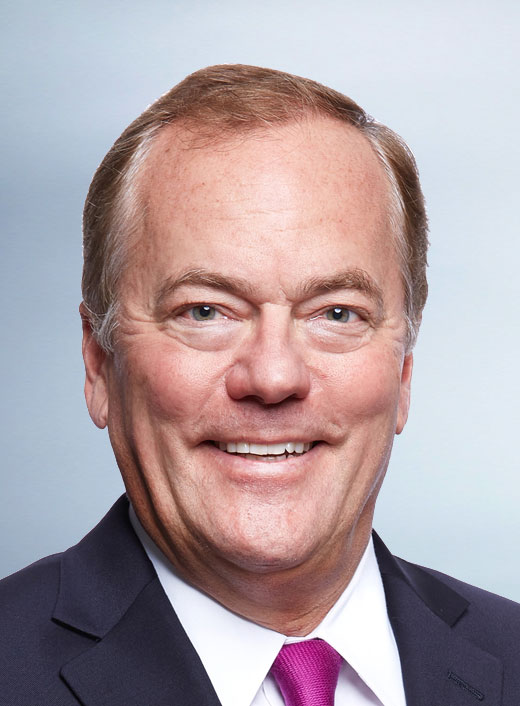