Gold bullion traded in a sideways pattern for most of September before dropping sharply on the last day of the month. Silver, true to its high volatility nature, had a more significant trading range ($18.40 to $17.04). Gold positioning only had a slight pullback which was most likely profit-taking given the relatively small amount. Some hedging occurred likely as well.

Gold bullion remains in its uptrend from its 2018 summer low. The short-term pattern appears to be another consolidation phase. The main inputs in our gold bullion model all show long-term trends unchanged. All factors that we consider to be significantly correlating to gold bullion indicate that we are still in the early stages of a major long-term advance. After a very sharp rise, we see this correction as short term in nature. 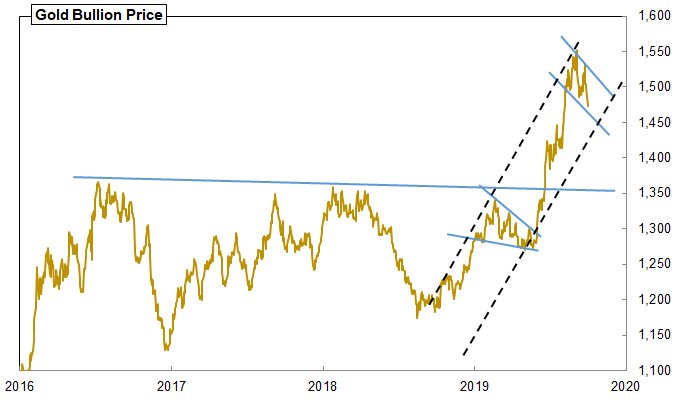 Despite the gold price consolidating in September, investors continued to aggressively increase their positions. This buying, combined with the 5Y/5Y inflation swap rolling over is very convincing to us. Our view is that gold should continue to move higher, in both the medium and long term. 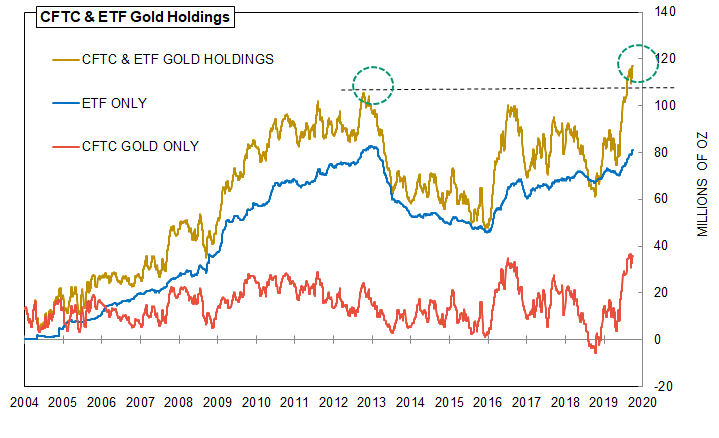 The Eventful Month That Was: The Macro View

The U.S.-China trade war continued to escalate in September. On September 1, the U.S. imposed a 15% tariff on $112 billion of Chinese consumer goods imports, and China began rolling out tariffs on the previously announced $75 billion of U.S. goods. The U.S. ISM Manufacturing Purchasing Managers Index (PMI)4 fell into contraction territory at 49.1 versus a 51.3 consensuses estimate, a big miss (a reading above 50 indicates expansion, while a reading below 50 indicates contraction).

The OECD (Organisation for Economic Co-operation and Development) cut its forecast for global growth from 3.3% to 2.9% for 2019, and from 3.4% to 3.0% in 2020 ― the lowest yearly growth rates since the GFC. The OECD also noted that downside risks continued to grow, citing the impacts of U.S.-China trade tensions and a no-deal Brexit. Despite the negative news, however, risk assets had a very sharp reversal higher. The news catalyst was a rumor that China and the U.S. would meet in October to resume trade talks. But we believe the more likely catalyst was China’s reserve requirement ratio (RRR) cut amounting to about $126 billion to help shore up its weakening economy. This cash injection, however, is unlikely to boost the overall Chinese economy as liquidity is already plentiful; it is the growing pressure from the escalating trade war and sluggish domestic demand that are sapping business and consumer confidence. What the RRR cut did have was an impact on overall market credit liquidity, and this was a factor for the risk-on rotation.

As the OECD noted, global growth remains weak. As expected, the ECB (European Central Bank) announced a new QE (quantitative easing) program of 20 billion Euros per month in asset purchases for an indefinite period starting November 1, a lowering of deposit rates by 10 basis points to -0.50%, and a call for more fiscal stimulus from EU countries. The ECB also reiterated its inflation targeting goal, to which we remain highly skeptical. The U.S. FOMC (Federal Open Market Committee) meeting occurred the following week, September 18, with the Fed cutting Fed Fund Rates by another 25 basis points, to a range of 1.75% to 2%. Guidance and language were mostly in line with consensus.

In mid-September, Saudi Arabia’s main oil processing facility was attacked, resulting in a loss of approximately 5.7 million barrels a day of oil production. The price of crude shot up dramatically, reflecting the significant near-term loss of oil output and most likely finally pricing in the geopolitical risk premium into the crude pricing strip. The main impact for gold would be via lower interest rates as climbing crude prices will act as a higher tax on a global economy that is already slowing rapidly.

At the end of the month, two additional events occurred that will likely impact financial markets going forward. The first is an impeachment inquiry on President Trump. The second was a Bloomberg report of a proposal to restrict or ban Chinese corporations from accessing U.S. capital markets. Possible delisting of Chinese equities, prohibiting government pension funds from investing in Chinese equities and other restrictions of capital were reported. There are more than 150 Chinese-listed companies on U.S. exchanges with a combined market capitalization of more than $1 trillion. Such a proposal would be yet another significant escalation, but this might push us from trade war to financial war.

Repo Madness and “QE-Lite”: A System Starved for Liquidity

At the time of the FOMC September 18 meeting, overnight repo rates (short for repurchase agreement, usually an overnight loan) shot up dramatically well above the Fed Funds Rate. The repo rate is the rate at which the central banks lend short-term money (usually overnight) to banks against Treasuries. Typically, the repo rate should not be materially higher than the Fed Funds Rate in a healthy funding market. The last time we saw repo rates shoot up was back in 2008 during the GFC when financial firms were too fearful of lending to one another.

There is not a very good answer as to why repo rates rose so dramatically last month (10% at the peak, above the 2008 level) and stayed elevated despite numerous Fed injections over the weeks. The best explanation we have heard is that there was a confluence of substantial funding needs at a time when the Fed balance sheet had shrunk too small relative to the amount of Treasuries held by commercial banks.

When the allocation mix includes gold, the effect of gold’s non-correlated behavior, will lower the portfolio volatility.

It appears that the funding market is now feeling the effects of the Fed’s quantitative tightening (there is always a delayed effect). The disconcerting part is that the Fed does not appear to have a sense of how significant the reserve shortfall was, nor the timing, as witnessed by the number and sheer size of the liquidity injections. The Fed is offering up to $70 billion a day in repurchase agreements until October 10 to provide enough reserve liquidity. If this temporary facility proves inadequate, a program to expand the Fed balance sheet may be in order (i.e., QE) to address this reserve scarcity. A new potential QE round is not (for now) a repeat of QE1, 2 and 3 to “save the economy.” This new QE round would be more of a “QE-Lite” to address the current reserve liquidity plumbing problem.

Moreover, this funding problem should be addressed quickly; setting a Fed Funds Rate and then having the overnight market rate well above the target range is negating the goal of lower interest rates. The repo market is signaling liquidity stress in the overnight market. If this stress broadens out, a much wider liquidity problem would be more significant to the markets.

A market measure of stress/liquidity we track is the LIBOR-OIS spread which is the difference between an interest rate with credit risk built-in and the risk-free rate. When LIBOR-OIS spreads are rising, it is a sign that the financial system is under some stress. In the past year and a half, the rolling 30-day correlation of gold bullion to LIBOR-OIS has broken out of its multi-year range and into a much higher correlation range (see Figure 1). Correlations are rising likely as a sign that liquidity and credit conditions are deteriorating. 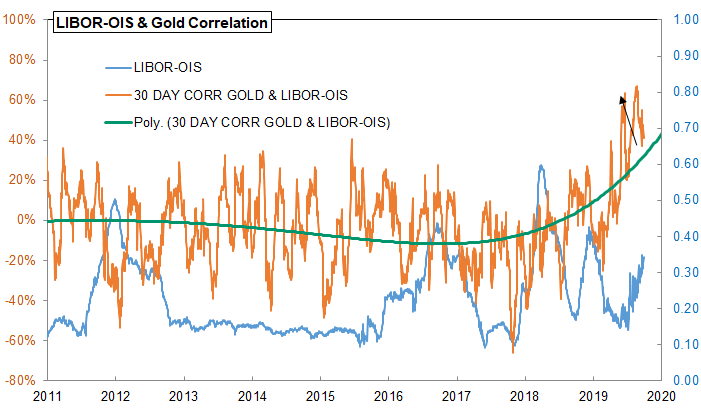 Historically, when correlations rise, volatility tends to increase and the ability for diversification lessens. Rising correlation is not necessarily a bear or bull market call, but it is a potentially significant change in market dynamics. After a period of extended macroeconomic and market consistency, the recent sharp decline in expected economic growth and rising risk is starting to show up in longer-term secular trends. These early signs of potential secular trend shifts are not unexpected given: 1) how late we are in the current market cycle; 2) how dominant central bank policies are in pricing capital market assets; and 3) how synchronized this global slowdown has become.

Correlations underpin the multitude of algorithmic-driven risk-parity type portfolios.6 Depending on how and how quickly correlations change, there is a risk of a disorderly reversion in asset prices. 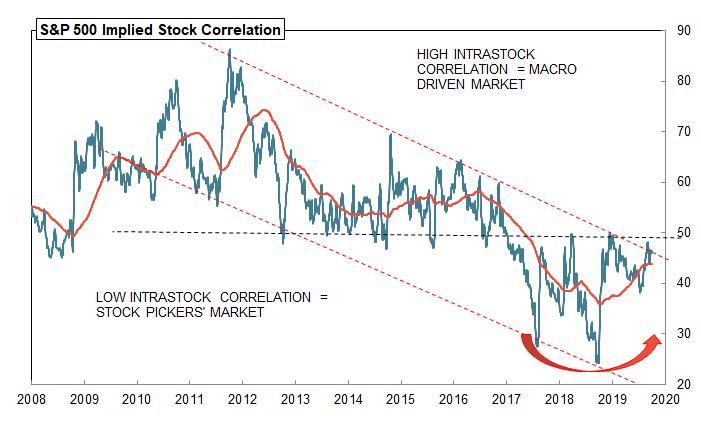 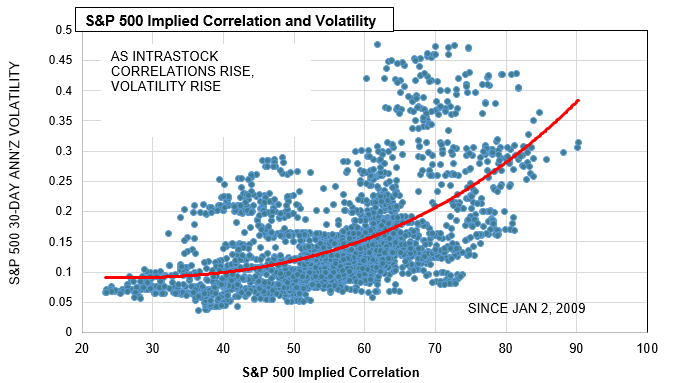 What does this mean for gold? There are two considerations. The first is that as correlations rise, non-correlated assets will become more valuable. Both gold bullion and gold equities have historically low to negative correlation to the S&P 500 and continue to exhibit this characteristic to date. Secondly, as correlations rise, volatility will likely increase.

Paul Wong, CFA, Market Strategist
Paul has held several roles at Sprott, including Senior Portfolio Manager. He has more than 30 years of investment experience, specializing in investment analysis for natural resources investments. He is a trained geologist and CFA holder.
Read Bio